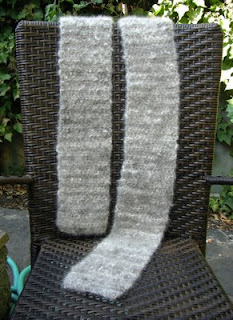 I just finished another scarf today. This one is only 6 1/2 ft long and about 5 1/2 inches wide and was a custom order. It's made from malamute hair blended with a small amount of wool. I spun it somewhat lumpy and then crocheted it. Husky hair tends to be fragile and holds up much better when blended with another fiber. The hair was a mixture of white, gray/brown, and light gray. Carding it together with some off white Corriedale wool made it come out mostly light gray with bits of white and darker gray/brown.

It's incredibly soft, thick and warm and looks great wrapped around the neck with both ends hanging down in front. I hope I'll get a photo of its new owner wearing it.

For those who don't like the idea of using pet hair to make a scarf, please understand that that I always soak the finished yarn in baking soda in order to eliminate any odor. 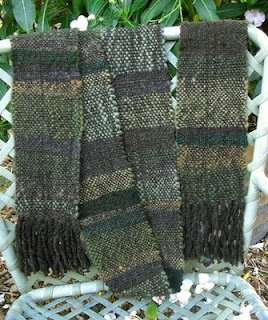 One of my favorite customers had been wanting a very long scarf for a very long time, so I finally decided to make him one. He wanted it woven and in earth tones, and I promised it would be about nine feet long at least.

This took some doing, as I had to find a spot where there was enough space to warp my little heddle loom to that length. I decided to do it in my cabin, since there isn't all that much space in the room I rent in Berkeley. So I paced off about 12 of my size 9 feet and figured that would do it including the fringe.

I spun the warp yarn a thin two ply for extra strength, as I've had problems with my handspun fraying as it went through the reed. That took about six hours at least, as 12 feet of 2 ply warping for a 4 inch wide scarf is one heck of a lot of yarn. Once I got it on the loom, it went well though. No fraying at all.

I made the warp in undyed natural brown Romney wool, then dyed some thicker Corriedale for the contrasting weft colors in subtle greens and browns. About a week later, I took it off the loom and found it was about 11 feet long!

I called my customer and told him that it wrapped around my neck and hung down to my feet. He was completely thrilled to hear that, and very glad it wasn't just some kind of skimpy nine footer. He loved how it came out and has promised to send me a photo of himself (and maybe his girlfriend, too) wrapped up in this scarf. Definitely the longest scarf I've ever made!
Posted by lisa at 9:18 AM No comments:

Now that summer is over, I've finally found some raw flax to make an old fashioned straw hat. What with the wild fires and various other distractions, I got a bit behind in my work.

I've been trying to find spinable flax off and on all summer. All my suppliers were out. I am also out of the raw hemp that I like use to make my straw hats. I had given up on ever making another straw hat when a new member of my spinner's yahoo group showed up selling flax that he grows and processes himself. I immediately ordered some of his less processed fiber, thinking that it might replace the hemp. He also sells roving that's been prepared for spinning, and I'll probably get some of that at some point, too.

The flax is not quite as rough as the hemp was, but it's a good substitute. So I went ahead and made a straw hat even though it's now fall and put it up on my website. Heck, maybe somebody in Australia will want it! It just looked too nice to put away until spring.

Here's a photo of it outside my cabin in Mendocino County. 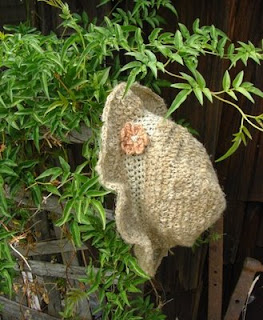