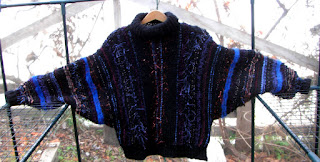 I haven't made a sweater in awhile, so decided it was about time.  A birthday party was being held for an old friend, and I had 'nothing to wear' - that is nothing I wanted to wear.  I hate shopping so decided to make myself a new sweater.  I opted for an old favorite pattern called a bat wing sweater.  It's knitted all in one piece, starting at one cuff, then knitting right through the body and out the other arm.  I improvised (as usual) as I went along, so it was a challenge to remember what I'd done when I started on the second half of the body.  It all worked out though, and was a big hit at the party.  It's mostly wool, with some silk, dyed samoyed hair, and art yarn stripes that add a little bit of sparkly. 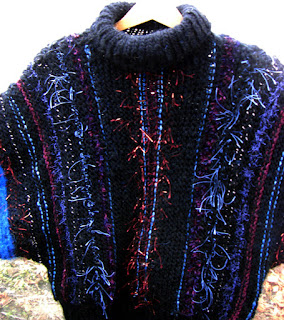 It was pretty cold where I was going - the Ft. Bragg, California coast in March can be icy cold and very windy, especially since we were in a house overlooking the ocean.  The sweater kept me very warm, though.  I tend to spin a little on the bulky side, so most of what I make in wool comes out extra warm and cozy.  It's still cold here in the Mendocino County hills, with non stop cold rain storms featuring occasional snow, hail and sleet.  So I expect I'll get some more wear out of this sweater before I put it away for the summer.
Posted by lisa at 11:47 AM No comments: