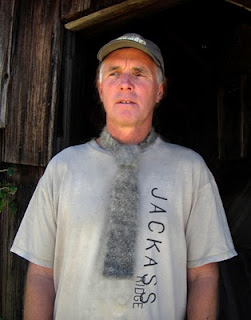 I had to put my hat making aside for awhile in order to figure out how to finish this project. A very nice customer asked me almost a year ago if I could make him a necktie out of his dog's hair. I told him I could make a hat, but a necktie was doubtful. I tried to discourage him thinking that he really wouldn't actually want to wear this thing. So he agreed to the hat and loved the result. (There's a photo of it here at #B.) He still wanted the tie, though. So I finally agreed to try and make it, and this is the result.

I first tried felting the fiber, but that didn't work very well. Felting is something I need to learn more about. So I ended up knitting it on small needles in a seed stitch. It took awhile, but seems to have been worth the effort. The customer is very happy with the result, and I've received some favorable comments on my Facebook page where I posted this same photo.
Posted by lisa at 11:33 AM 2 comments: