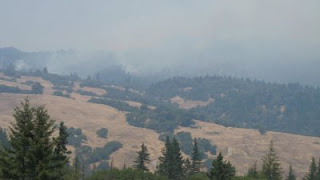 My home in Mendocino County is threatened by wildfires, and I've been busy cutting weeds and preparing to evacuate for the past few days. The fires were started by dry lightning strikes all over northern California last Friday night. We are safe for now, but things can change in a minute when winds shift.

From Saturday till late Monday our neighbors who are at 'ground zero' and able to see flames from their kitchen window had no help fighting the fires other than our local community fire brigade. The CDF is currently understaffed, and the resources they have were stretched too thin to respond to all of the over 100 fires started by the lightning strikes. They are also extremely restricted in using their "fire bombers" that spray fire retardant to stop fires. This has always been the most effective way to protect homes and stop the fires. They are now using only fire breaks cut by bulldozers around threatened structures and are just letting the fires burn. 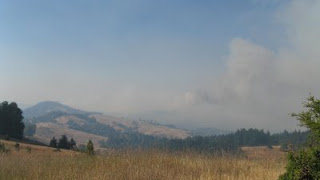 We are now officially classified as a "disaster area" so help is being sent in from other states, and I'm hoping our homes will be saved. The National Guard has been called in also. Unfortunately most of the National Guard is in Iraq, however, along with many of the men and women who might otherwise be available to be working with Cal Fire. 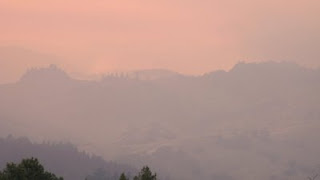 People who are very close to the two fires have described seeing "a 50' wall of flame coming over the ridge." Ash from the fires is now blowing onto houses that are several miles away.

This is an unprecedented event. The last time we saw fires started by dry lightning was over 20 years ago, when 70 fires flared up overnight all over the county. This is twice as big and with drastically cut resources to fight it.

I've posted some photos. They don't really show the extent of what's going on, but it's all I have right now. The cloud looking stuff is smoke plumes. The valleys are so filled with smoke that they are advising people to stay indoors. I had to bring my son back to the Bay Area because he has asthma, but I will be going back to prepare for evacuation.

So, not much hat making going on right now!
Posted by lisa at 7:18 AM

that's scary stuff I hope your home was not damaged, and I hope the ones displaced will soon be able to return and rebuild.

Thanks for your concern. Nobody lost their home thanks to the efforts of fire fighters who came from all kinds of places to help out. It was indeed very scary.