I decided to get some fancy display heads for my hats to dress things up a bit for the holiday fairs. When they arrived I realized they were a lot bigger than the ones I usually use, and they needed scarves to go with the hats. So I made some to match a few of the nicest hats. Here are three hat and scarf combos I came up with. 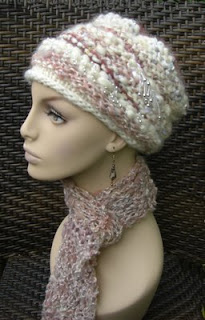 The white and light rosy puce colored hat has silver beads in it that are a little hard to see, but if you click on the images they enlarge to full size, which helps a lot. The hat that goes with it is a blend of wool and white mohair and matches some of the yarn used in the hat.

The black one has quite a bit of sparkly in it, which is also hard to see because for some reason computer images can't register sparkles very well. This one is made from wool with novelty eyelash added. The scarf is a little wider and longer than the other two. All the scarves are knitted.

The yarn for the top of the black and gray pill box hat has bits of different colors of commercial yarn plied in with black cord. I used that same yarn for the scarf. This hat is crocheted. After I'd finished the scarf, I realized that it would also go well with the red and gray hat in the following post because it has some of this same yarn in it. Juaquetta Holcomb gave me the idea for this yarn, and some of it is hers. 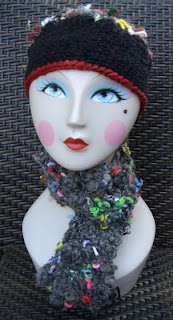 I've now made a Hats and Scarves page for my website. All of these plus one more are on it. 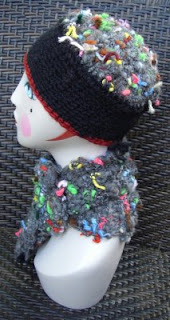 That black one with the sparkles is really nice. Did you sell it?

No, I still have it.