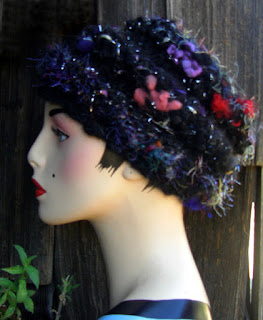 Over the holidays, I had several orders for hats made of dog hair.  Four of them were to be made from some black poodle hair that the customer sent me.  The first was a lumpy knit hat similar to one on my website but with the poodle hair instead of wool. It also included some wool and art yarn with novelty fibers added in.  No sooner than I had finished this hat than another customer emailed me wanting a black lumpy knit hat with dog hair and mohair.  The second hat included some dark brown chow hair and lots of mohair in the art yarn.  The two hats came out looking somewhat similar but definitely not the same. 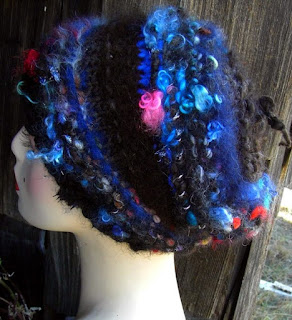 Meanwhile I had three more poodle hair hats to make.  Two of them were for children and were made from a blend of the poodle hair with some wool.  They were matching but in different sizes.  The original design for this hat was on my website, but in an adult size. It included some bits of colored wool added into the yarn for the row that frames the face and the ties.  There was a tassel with a wooden bead on top.  A different color bead for each child. 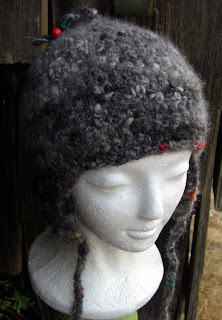 The last but not least poodle hair hat was all poodle and in a long round cap style.  This was for an older adult.  The little white hairs show up in this yarn and add some nice texture and interest.  I would have liked to keep this one for myself.  I have enough hats though! 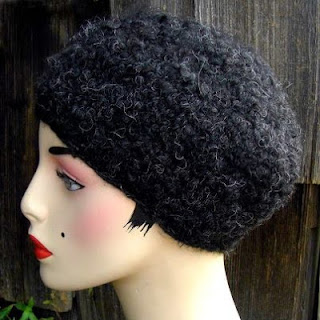 Unknown said...
This comment has been removed by a blog administrator.
9:12 PM

Unknown said...
This comment has been removed by a blog administrator.
9:12 PM

What breed of dog do you have?Send me the information to my email.

The comments section here is not working too well. It deleted some comments. My email is kundrol@gmail.com