Ski cap and scarf in Berlin 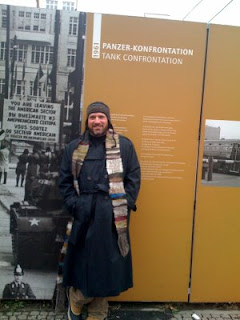 This is a photo of my son in law, Marshall, wearing a ski cap I made him awhile back along with my daughter's scarf, which he had apparently borrowed. She was taking the photo. They were in Germany for his mom's one woman show at Aanant & Zoo in Berlin. It was February and plenty cold by the looks of it. (Click photo to enlarge.) The scarf is about 11 feet long and is woven. I've only made two this long so far. The other is shown in one of my October 2008 posts.

Marshall's mom is Channa Horwitz, whose interesting mathematical art has been shown in LA at the Getty Museum as well as at many other galleries in the US. The Berlin show was entitled "Searching Structures" and is listed at http://www.argobooks.de/en/aktuelles.html She was also in a group show at Aanant & Zoo last winter, and she has another solo one going on now at Brandenburgischer Kunstverein, Potsdam called "Variations in Counting One Through Eight." She is quite the busy lady!
Posted by lisa at 12:21 PM